I haven’t written a restaurant review for aaages.

But the food at White Rabbit was amazing enough to make me want to. I’m still obsessing over a stand out dish of charred broccoli (and as someone who really doesn’t like broccoli, trust me when I say this was a revelation) with mead puree, pickled mustard seeds and almonds. The vegetable had an almost meaty caramelisation to it, while still retaining a tender vibrancy. I’ve never wanted to eat broccoli as a main course before but I could have happily sat there and polished off plate after plate of this.

A small dish of of burrata, sweet pickled plums, squash, sea purslane, pumpkin seeds and fennel pollen was scarfed with gusto, the perfectly al dente squash worked really well with the sweet and sour plums and velvety cheese. Charred aubergine with smoked yoghurt, honey and ash was another winner. Having said that  the yoghurt may have been a teensy bit overkill. Just ever so slightly.

Gin and beetroot smoked salmon  bejewelled with roe, a pickled tangle of fennel, dill pollen and pomegranate was an exercise in freshness and light. This was followed with hake with burnt leeks and confit garlic aioli which was hauntingly flavoursome, the tiny beads of smoked yeast like so many hundreds and thousands, laced with pure eau de croissant. We fought over a bowl of mussels in miso dashi with shiitake mushrooms, which was basically layer upon layer of concentrated savoury goodness. Then a dish of king scallop with hunks of Tuscan sausage, harissa, coriander oil and crowned with straw potatoes which was sweet, spicy and demolished in seconds.  It’s a bit of an understatement to say they do some pretty clever things with seafood in this place. 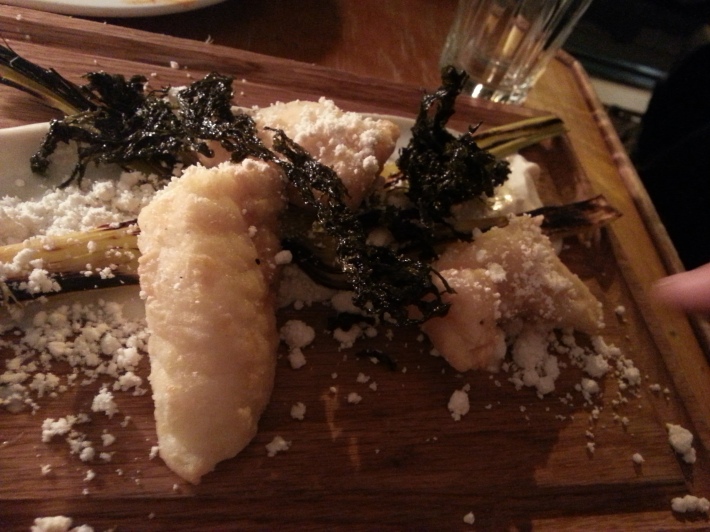 We were so full at this point that we were reduced to just morosely picking at the final dish of lamb belly with miso and melon radish. If I had one criticism it was that the lamb wasn’t crispy enough for my liking and the miso barely detectable.

On a Saturday night the place was rammed. Nonetheless the staff managed to remain incredibly laid back, approachable and totally clued up about everything on the menu. I was invited to eat at White Rabbit, but in the words of Mr A Schwarzenegger – I will be back.
16 Bradbury St
London
020 7682 0163