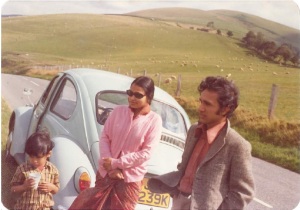 When she first arrived on these shores, nineteen and newlywed – a green eyed slip of a girl, shivering in her unfamiliar winter coat and grappling with the lingo; my mother struggled with a number of elements. One of the toughest aspects of her new life was trying to recreate traditional dishes minus so many of the familiar ingredients she’d grown up casually plucking from the trees and plants in her village. Back in the days when curry came in Fray Bentos tins and garlic was still considered to be a foreign ingredient, creating the most basic Bengali supper or teatime snack was more often than not an exercise in creative improvisation. Relatives returning from trips to the motherland would be excitedly mobbed, their suitcases bulging with delicious secrets. Chinese dates (boroi), dried fish (shutki), jaggery (toffee like boulders of unrefined palm sugar), jolpai (Bengal olives), jackfruit seeds and other precious edibles were meticulously divvied up. For these much coveted goodies simply weren’t available for love nor indeed, for any sort of currency.

How times have changed.

I know the trains are rubbish and the air is filthy, but one of the best things about living in the smoke right now is the astonishing amount and variety of ethnic treats you can lay your greedy mitts on, if you’re so inclined. A brief jaunt around Chinatown the other day resulted in the following haul:

Almond Tea –You add hot water to these luscious sachets of gingko nuts, fungus, yam and almond powder, and the results are pure molten marzipan.

Dried anchovies and peanuts  – these pocket sized snackettes are pretty moreish. Speckled with chilli and spring onion, the anchovies are both salty and caramelised to addictive effect – which might sound a bit wrong, but tastes oh so right.

Umeshu- super fruity and podgy with booze-saturated umeboshi plums that loll around at the base of the bottle. An icy drop of this stuff can slip down with dangerous ease.

Despite having access to grub from practically every crevice of the globe, it seems there are still some foodstuffs that require a bit of the old suitcase smuggling. One of the few things I haven’t been able to track down anywhere has been the elusive, lesser spotted tiger nut.

The Ancient Egyptians ranked tiger nuts amongst their oldest cultivated plants, having discovered them some 4000 years ago, before introducing them to the Spanish. Apparently, they used to make cakes with them. On a recent trip to Valencia I raided the local supermarket for a hessian bagful of “chufas”, after acquiring a taste for the cool, sweetened nut-milk they sell on street corners. Back in East London I decided to celebrate the arrival of summer with some horchata ice cream and plum wine jelly. However, most of the recipes I came across seemed to be made with the Mexican version of rice and almonds, rather than the sweet, nutty tubers, so I decided to experiment by soaking and grinding the tiger nuts, before adding them to a classic custard base. This is definitely one of those start-a-day-or-two-before-you-want-to-eat-it type recipes, but is absolutely worth this piffling hassle. Rich with cream and custard and with a subtle nutty chord woven throughout, this makes quite a sophisticated little ice. It works particularly well with the fruity joy that is plum wine jelly – all in all the perfect way to rip off that dingy shroud of winter and bask it up in the intermittent sunshine (cool shades and VW Beetle are optional).

For the ice cream

Juice of half a lime

One sachet of gelatine

would be excitedly mobbed,