Did you know that the man who invented Imperia Russian Standard vodka* also invented the periodic table of elements? Or that the liquid is distilled no less than eight times, and filtered twice through Ural mountain quartz?  Or indeed, that “Stolichnaya” is just another flavour in Russia and has been heavily marketed to us in the west, whereas the more discerning Russian connoisseurs are less impressed at its mere double distillation? 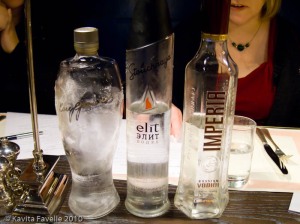 I picked up these morsels of information, and so much more at a recent vodka tasting at Bob Bob Ricard. I also discovered that I harbour a predilection for very, very expensive vodka, you know the dahl on toast for a month sort. The sort that’s made using wheat from only the most supreme of harvests. Like the best vodka, Kauffman Special Selected Vintage tastes of nothing when you drink it, but invades the mouth with retrospective floral fumes. Tim Booth once said, “if I hadn’t seen such riches I could live with being poor”, I realise now that the man was clearly talking about Kauffman  vodka – I want to drink it and only it all the time; but sadly it’s only available in Russia. 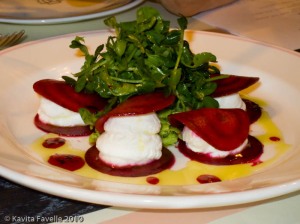 I’d been meaning to go there for time (BBR that is, not Russia – I’ve been there), the place had become the stuff of legends in my mind. When people talked about emergency champagne buttons at every booth and spotting staff out and about in Soho in their distinctive little pastel coloured uniforms I just sighed and wondered. 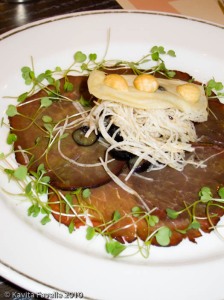 So when the gorgeous Kavey invited me along to a vodka tasting paired with matching foods I was like a little labrador of excitement ( Thanks again Kavey)! A couple of Sundays ago Luiz, Neil, Mimi, Kavey, Rachel and I gathered together to share in an afternoon  tasting of exquisite little shots of artisan vodkas paired with artistically presented platters of delicacies  in the glamorous “Orient Express”- esque settings. My sighs had been answered.

The brilliant Leonid took us through our tasting, his incredible passion and knowledge of the clear stuff was apparent. He enthused without a sliver of condescension or assumption and I came away feeling a great deal more informed and curious about the  nuances of this aqua vitae.

The food at Bob Bob Ricard is exquisite. A dish of pelmeni (meat dumplings) with vinegar and soured cream was my favourite, the juicy,  gibbous  pouches of meat slathered in cream and dipped in tang, these were pure nuggets of nirvana and I was most reluctant to share my sharing plate.  I also loved the quails egg mayonnaise with anchovies. On screen, this might not sound like all that, but those anchovies were so dense and meaty – the defined, muscular flavours went seamlessly with the alcohol.  A dish of potted shrimps was just pure sin, the butter to shrimp ratio being way out of kilter, it paired meltingly with some fragile shards of melba. A jellied ox tongue with creamed horseradish came all dolled up in aspic and was almost too pretty to eat. We also tried a Sipsmith vodka, which unsurprisingly had a more juniper-like bouquet. This was served with malosol cucumbers, pickled on the premises and seriously addictive. 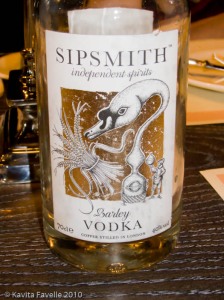 After all this we were served a sumptuous roast dinner, each one crowned with a  gigantic nimbus of Yorkshire pudding, bigger than my head and replete with sticky, caramelised roasted vegetables and hefty slices of perfectly roasted 28 day aged Aberdeenshire scotch beef, smothered in a deep, stout gravy.  This was all deeply upsetting of course, as I had gorged like sheriff fat man on the earlier plates, ignoring warnings of what was to come. This was topped off with a smorgasbord of perfectly executed souffles, tarts, jellies, cakes and some ethereally light rhubarb cocktails. Five hours later and defeat was finally admitted. My periodic table will never look the same again. 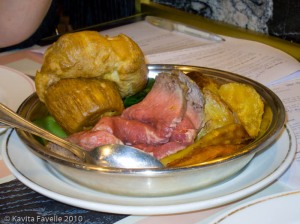 all photos courtesy of Kavey 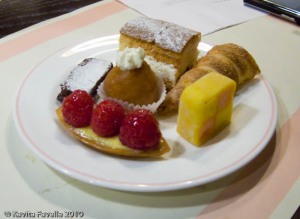