The Ledbury – Lunch with the Champion 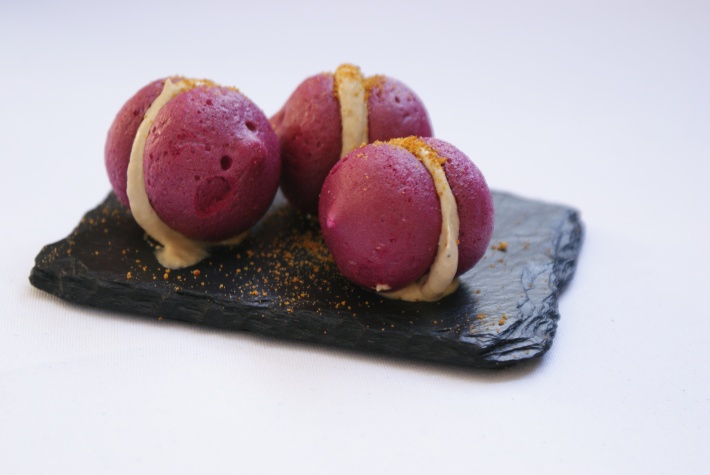 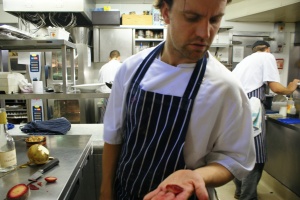 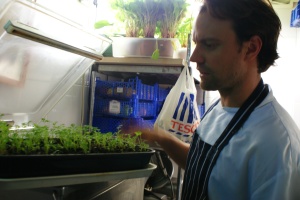 The chef gently cradles the fuzzy purple sphere, as if presenting his first born. He beams at us.

“It’s a peach” he explains, before slicing it open to reveal the juicy indigo flesh that bleeds softly into a pale white heart. We’ve just had one of the most spectacular lunches in the history of ever and now 30 year old head chef Brett Graham is introducing us to his tiny kitchen. He bounds into the back room and proudly pulls out a tray of green leaves from beneath a sodium lamp. I stare at him.

He dusts off a very dusty looking carrot. “Taste this” he says, breaking off a bit. I tentatively try a bit. It’s intense, like a reduction of twenty carrots into one raw stick. “They’re grown in sand; we get them specially sent over from France”.

The kitchen is a tiny, sweaty bustle of controlled precision. Everyone is deeply focused and it’s light years away from the cool, monochromatic refinery upstairs. He tells us how he got lost walking home from some crazy party the night before. He seems so deceptively normal, for such a raging genius.

Rewind to six hours earlier when I leg it sweatily into the Ledbury, late for my lunch with 2009 Roux Scholarship winner Hrishikesh Desai and my shy companion JS (who prefers anonymity). We’re sat outdoors and I spend several minutes dripping in the Notting Hill sunshine trying to regain my composure while they giggle at me over their champagne glasses. Hrishikesh is from Pune, and it’s refreshing to see an Indian win such a coveted culinary prize. I watch his victory film before we meet and he blatantly doesn’t expect to win. Throughout our meal I am impressed at his humility, considering he’s going to be the Next Big Thing. Self-effacing and obsessed – he tells us how he’s from a devout high caste Brahmin family and it’s against his religion to eat meat. However, on his first day of culinary school in France he tried rabbit for the first time “for his career”. Nowadays he’s only vegetarian on his day off (watch this space for my interview with him at Lucknam Park where he works under Hywel Jones).

We begin to work our way through the vast thicket of food that is the tasting menu. An amuse of beetroot meringue is presented; foie gras cementing the darkly blushing conches. I expect to be enraptured, but despite being delicious, the heat of the day has taken the crispness off the exterior and they’re a touch on the soft side.

Hrishikesh talks about the competition. He describes the pressure of cooking within tightly timed restraints, with folk like the Roux brothers watching and flashbulbs popping as you try to produce a dish to rigorously exacting standards. I stop slagging off the meringues. He’s got a stint lined up at a very famous restaurant and seems so wide eyed and enthusiastic I find myself feeling quite protective towards him. I take a mouthful of the amuse of scallops and stop mid sentence. Perhaps it’s the thwack of frozen horseradish against the dulcet, mushroomy bite of the bivalve. Or maybe it’s the pickled kohlrabi set off by the delicate seaweed and herb oil that encircles the plate; but it’s easily one of the most perfect things I’ve eaten all year. There are no words. 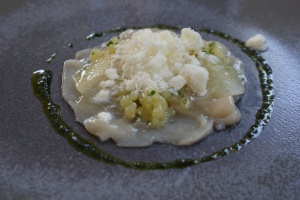 Next up are the heritage tomatoes and they look wonderful, like an edible Jackson Pollock. I take a bite and am transported to textural nirvana – think tubes of crisp filo encasing creamy, salty cheese, the intensity of dried olives and then the vine-sweetened flesh of the nightshade; every mouthful a donkey punch of flavour.

Our jovial waiter produces the celeriac baked in ash. As he bisects it to his own drum roll I realise I’ve been here before. I sampled this at the Taste festival earlier this year, but didn’t rate it, partly because I was uncomfortably full at the time, but also because it was so massively eulogised. Second time around and it’s ruddy gorgeous, the boar kromeski is packed with flavour and practically bursts from its panko jacket. The tender, yam-like celeriac headlines beautifully from its blackened cocoon with the support act of wood sorrel, hazelnut and grated hen’s egg, deft splashes of flavour that echo and enhance. 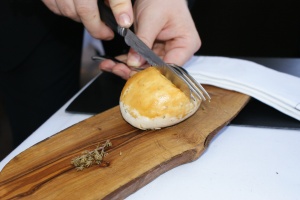 Mackerel is up next, here it’s flame grilled until smoky and crisp and sits butchly next to a cool lick of avocado mousse. It’s served with cured mackerel and accompanied with tiny croutons which nestle amongst micro-bites of aromatic shiso leaves. It’s so interesting to eat a meal like this with a chef like Hrishikesh. As each dish is served, I spend at most 15 seconds eyeing it up before being unable to resist its magnetic pull on my mouth. Hrishikesh on the other hand takes his in for minutes at a time, breathing in the smell and visually digesting the finery of the feast before him. I imagine that if he could swirl the plate he would. It’s also interesting to note our different reactions. While mine is predominantly excitement and disbelief at such brilliance, his is more about identifying the techniques and ingredients. This is not food to be guzzled, more sensations to be savoured, in delicate morsels allowing no flavour to escape its chance to be tasted. He wants to know the provenance of the  shiso leaves and he’s told that they’re Dutch not Japanese. His palate is remarkable. My palate doesn’t know the difference, and if I’m perfectly honest, it doesn’t care. It’s too busy reveling in being pampered as every mouthful provides a new and complimentary sensation. It’s spun out by wave after wave of flavour, as each dish layers up into a delicious polyphonic crescendo and my taste buds are left begging for mercy from the sheer white noise of flavour.

The monkfish is the only real duff point; it’s ever so slightly over cooked. When I say “duff” I of course mean just not as excellent as everything else. While the cauliflower puree is gorgeous, it’s the only dish that doesn’t stain the tongue with flavour.

The lamb is next and it’s astounding, the loin in particular is lush and almost pâté like. The miso aubergine is a densely savoury velvet and makes so much sense that after one mouthful I feel convinced that nothing else should ever be served with lamb again. Brett doesn’t bother with heavy, rich sauces; he just has a rock hard faith in the natural juices that seep from each protein. You can totally tell he’s been cooking since he was 15. 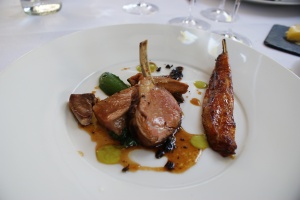 Yes, there are spherifications here and even the odd foam, but you never sense any stress on the plate. It’s done in an artfully relaxed way, rather than anything pretentious. Every single element before you is imperative.

The cheese trolley comes round, it’s a pungent double decker of immortalised milk, the accompanying biscuits are fragile and crumbly with ginger and spice.

We are served a jellied terrine of pressed Gariguette strawberries with hibiscus sauce and warm, vanilla churros. The fresh doughnuts are sugary and warm, with hints of cinnamon. There’s a thyme brulee, the caramelized shell yielding to the delicate, herbal cream. Brett’s signature dish of passionfruit soufflé with sauternes ice cream is served and we are all (especially Hrishikesh) practically hallucinating at the quality. It’s utterly perfect. The gossamer crust, the fluffy, nebulous interior and the ice cream melting like a Dali clock in the middle…Finally we’re treated to a  selection of some fantastic petit fours served on a bed of cocoa nibs, but I can barely take another bite.

Brett’s laid-back, gutsy Antipodean style is stamped all over these dishes. It’s all so fresh and seasonal, not to mention damned cheap for what you’re getting. Our bill comes to £77 a head (the tasting menu is £70 a head, £108 with wine and an extra £7 for the cheese). I’ll be very surprised if another Michelin star isn’t around the corner…. He finally emerges from the kitchen beaming at us, like an actor at the final curtain call. We all want to burst into applause.

He sits down for a chat, “let me show you around the kitchen” he offers….. 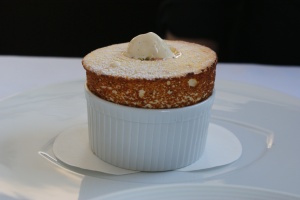 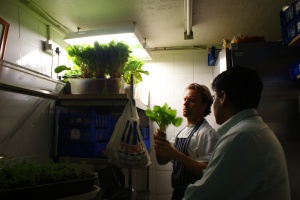